I spent the last week in the Arctic Circle.  The purpose was to get into the mountains, away from civilization, and see the Northern Lights. Memorable isn’t a big enough word to describe the experience. The sun never rose. And the moon never set; it just made wide looping circles over our heads each day.  I'm writing from an airport in Norway before I forget this adventure.

My husband and I arrived in Tromsø on a snowy night.  We stayed at a little hotel on the harbor where snowy mountains and flowing fjords ran into each other. We couldn't see the town from sea level, so we took the cable car to the top of the tallest mountain. From up high, the city looked like tangled strings of diamond necklaces.  I wasn’t dressed warmly enough, and I made a vow to spend the rest of the trip in head-to-toe snow gear.

The next morning, we woke up early and walked around in the 4 hours of glowing sky that constitutes daylight in the winter. We stumbled upon a wooden boat that looked to be at least a hundred years old.  The captain said he was giving tours of the fjord later in the day.  We signed up for one, then killed a few hours drinking at an ice bar and visiting a little polar museum.

Our time on boats was magical.  We learned about whales, Sami culture, moose, and the Nazi occupation of the area, which was unsettling but felt important to understand.  We saw our first glimpse of the dancing aurora through the clouds. Later, we went to a little floating sauna in the harbor.  When we got too hot, we’d jump into the sea.  After several innings of burning heat and freezing cold, we had a dinner of reindeer donuts, lots of cod, and akvavit.

We left Tromsø by ferry and headed to a little town called Finnsnes, where we caught a bus to the mountains.  We stayed in a room that was mostly windows.  There were no tvs or radios, and no access to food. So we went back into town for provisions, then camped out in our glass apartment for two days with little besides crackers, a hunk of cheese, and our thoughts.  We spent about 8 hours a day just looking out the window, staring at the sky, sometimes walking around outside to get a clearer view.  There was one night where the Northern Lights were so active that we just stood under them with our jaws dropped.

The aurora borealis is a faint green (oxygen) and purple (nitrogen) to the naked eye, but through a camera, the color is much brighter.  Still, the picture below doesn’t do it justice.  The dancing of elements miles over my head made everything seem so small, and I felt my stress level drop. My gratitude for the experience can’t be overstated.

Reader, my biggest takeaway from this trip: we are just so small in the grand scheme of time and space. Best to get outside and look up to be reminded of it. And also to be reminded to enjoy our short time here.  When we headed back to Tromsø on our final night, we found ourselves cheering on the runners who were racing in the Polar Half Marathon, and then later line dancing/exercising in the town square with the rest of the locals.  I felt as happy as I’ve ever been.

Now it’s back to having my nose to the grindstone, but I’m not going to forget to keep my head in the clouds. See you next Monday. -Em 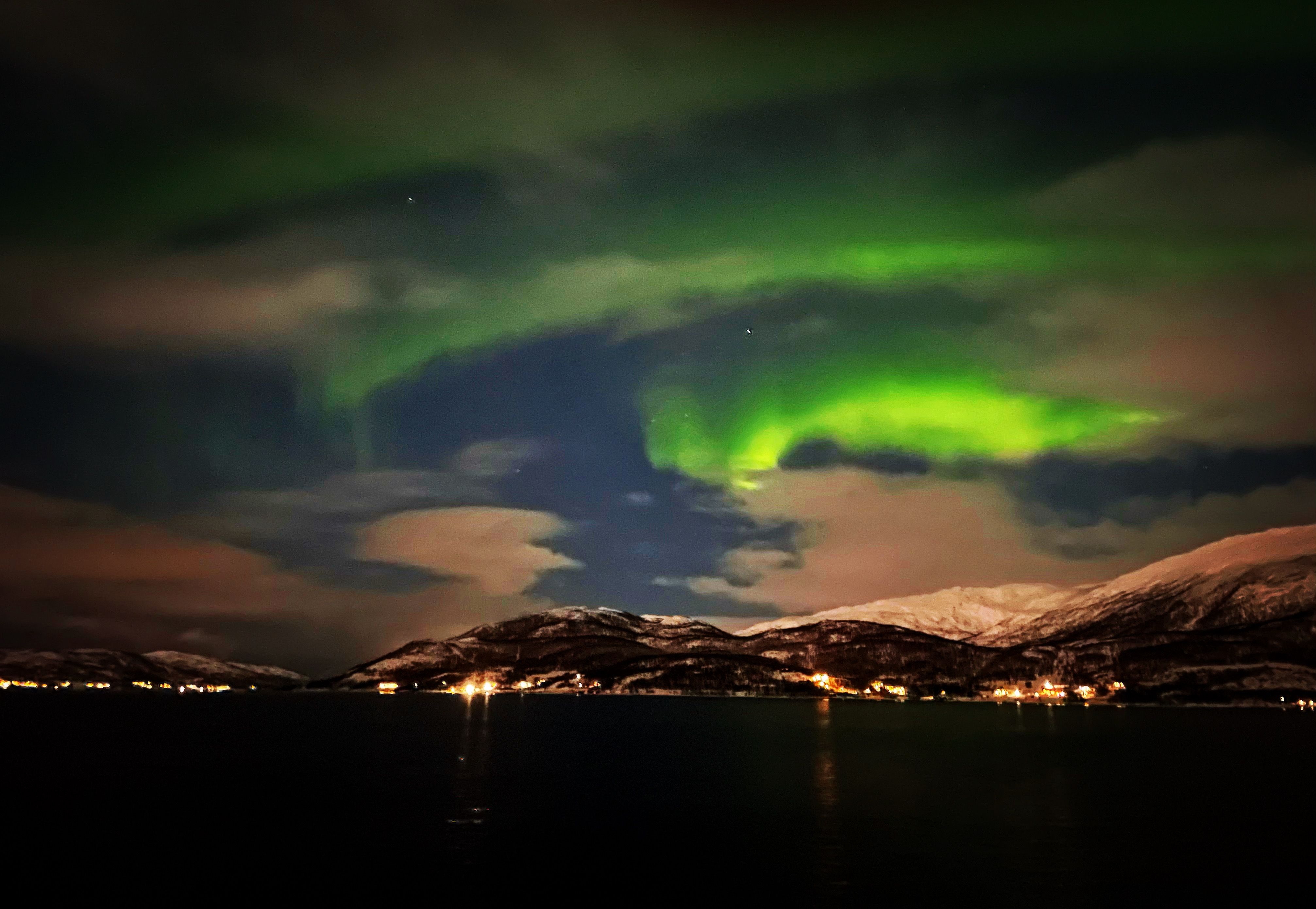